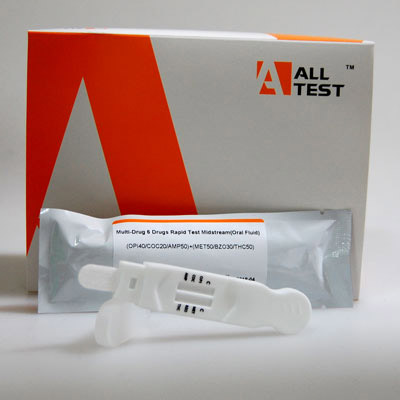 Midstream One Step Plus 6 Drug Saliva Test (Box of 25)

Midstream One Step Plus is a direct saliva “Collect and Run” drug testing kit with a built-in saliva alert indicator. The detection levels are slightly different for THC, BZO and OPI than in the standard Midstream One Step. The patented saliva tongue collector goes directly into the mouth and runs as soon as sufficient saliva has been absorbed.

Cannabis THC 11-nor-9-tetrahydrocannabinol-9-carboxylic acid (9-THC-COOH), the metabolite of THC (9-tetrahydrocannabinol), is detectable in saliva shortly after use. The detection of the drug is thought to be primarily due to the direct exposure of the drug to the mouth (oral and smoking administrations) and the subsequent sequestering of the drug in the buccal cavity3. Historical studies have shown a window of detection for THC in saliva of up to 14 hours after drug use.

Directions for Use:
Allow the DSD 863-A drug test kit to reach room temperature prior to testing. Instruct the donor to not place anything in the mouth including food, drink, gum or tobacco products for at least 10 minutes prior to collection.

There are no reviews yet.